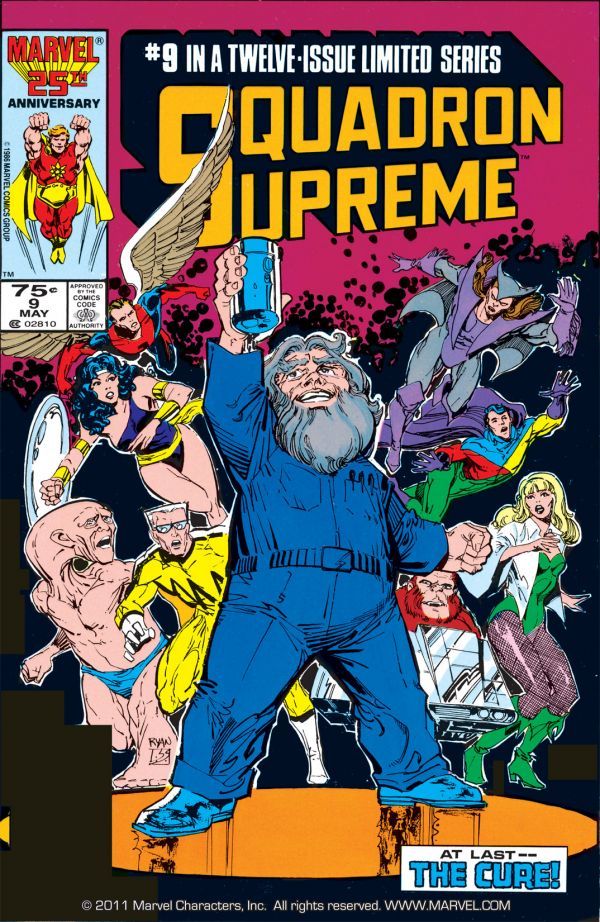 All that racin' around... All that compromisin' of my principles... And all I got for it is zip! Looks like it's all over for me now. I...gotta die...soon.

Hyperion lays on an operating table being given laser eye surgery by Dr. Decibel to repair his sight, which was damaged in his battle against his imposter, thinking back over the events as he's operating on. Power Princess looks on, realizing that she only loved the imposter because she thought he was the real Hyperion, and wondering if Hyperion could ever share her feelings.

Elsewhere in their headquarters, Foxfire watches reports on herself from when she was a villain, then watches reports on the Scarlet Centurion. She's interrupted by Doctor Spectrum covering her eyes with energy trendrils. She defends herself before realizing who she's fighting. Spectrum asks her if she wants to play poker, but she implies she'd rather have sex, which instantly gets his attention.

In the lab complex, Tom Thumb and Ape X work on Tom's Hibernaculum invention, while Ape X thinks about her unlikely attraction to him. Tom has a coughing fit and has to leave the room, and goes to see AIDA, who says he should tell people about his cancer, but he refuses, not wanting his teammates' pity. AIDA considers the situation, but decides to tell Ape X, even while knowing that disobeying the order might damage her artificial intelligence.

Ape X goes to Tom and tells him she knows about the cancer. He tells her he's tried everything, even traveling to the future to try and get the cure for cancer from the Scarlet Centurion, but that the price he asked - poisoning Hyperion - was too high. Ape X persuades Tom to go back there and steal the cure, but says she can't help due to her behavior-modification. In the end, Tom lies to Lamprey so that he will accompany him. When they reach the future, they battle with security robots before spotting the Centurion's citadel where they'll find the cure.

Zarda visits Hyperion to tell him she loves him, and despite his initial reluctance to see her as more than a friend, they kiss.

Back in the future, Tom and Lamprey make a Centurion minion take them to the Panacea Potion that can cure cancer. However, after Tom grabs a vial of it, they're attacked by guards. Lamprey fights them all off, breaking all the other vials in the process. Tom is reluctant to take the last remaining vial, but realizes he must, and they leave. The Scarlet Centurion's men ask if they should send chrono-troopers after them, but the Centurion says Tom's fate is already known to him.

Back in his own time, Tom discovers the potion is just made up of penicillin and complex vitamins - it will work on 40th-century humans thanks to their more evolved immune systems, but not his. Tom realizes he will die for sure, but not before returning what he stole. A week later, Tom Thumb dies.

Retrieved from "https://heykidscomics.fandom.com/wiki/Squadron_Supreme_Vol_1_9?oldid=1454286"
Community content is available under CC-BY-SA unless otherwise noted.