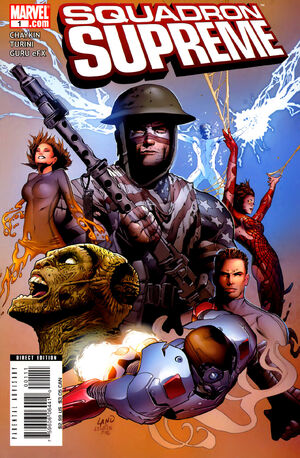 Appearing in "Power to the People, Part 1: Four for the Future"Edit

Synopsis for "Power to the People, Part 1: Four for the Future"Edit

It has been five years since the events of the Ultimate Power incident, when the otherworldly heroes known as the Ultimates fought the Squadron Supreme to a standstill in the skies above America. The Squadron went missing soon afterwards, leaving humanity to clean up the mess. But ordinary people have stepped up to the plate - Nick Fury, a man from another world, has been working for the America intelligence community, and the Icarus One, the first manned mission to the Moon in four decades, returned successfully a month ago and has been in quarantine since then.

In a flashback, we see the crew touched down with a mysterious cargo and are met by men in biohazard suits. The astronauts are taken into quarantine, and the cargo is taken for examination. We see something passing, via a chain of human contact, to a young girl in Eberhardt, Nebraska. We something else, passing, through a similar chain of human contact, from the strange cargo to the guard on the Tomb of the Unknown Soldier in Washington, D.C.

In Eberhardt, Nebraska, three boys are about to rape a girl. However, they are interrupted by a strange woman clad in red, who attacks the trio with biologically-generated webbing and swings away. The next day, the girl gives an interview in which she names the leader of the three, Ryan McCaslin, as her boyfriend.

In his Washington office, Nick Fury is meeting with Emil Burbank, the lead designer on the Icarus One mission. They are both being kept out of the loop, and neither of them like it much. Burbank takes the time to insult Fury, but both agree that they need to find out what is happening.

Nell Ruggles woke up this morning, thrilled by a dream in which she attacked three of her school-mates whom she does not like. She woke to find her room covered in webbing, and she was struck with the realization that it wasn't a dream. She has deiced to keep a journal.

In New York, Arcanna Jones has made a business, selling her powers to create "miracles" which her clients then claim as the work of their faith. Her current client wants her to move Saudi Arabia's oil reserves to a spot under Israel. However, before she can close the deal, she is contacted by Fury for a meeting. The three agree to find out what happened to the Icarus One.

In Washington, D.C., a terrorist cell is planning to blow up a nightclub. However, as they argue about where to go for food afterwards, they are attacked by a man dressed in ragged flags. A man who smells of rot, but also of prairie wheat. A man with a WW1-era helmet and gun...

At Edwards Air Force Base, Nick Fury and his accomplices have come to the end of their trail. Arcanna's powers deal with the human security, while Burbank's computer skills get them past the electronics. But in the central room, where they find the Icarus One astronauts turned to something not human, it seems that things are moving more to Fury's strengths...

Retrieved from "https://heykidscomics.fandom.com/wiki/Squadron_Supreme_Vol_3_1?oldid=1454297"
Community content is available under CC-BY-SA unless otherwise noted.