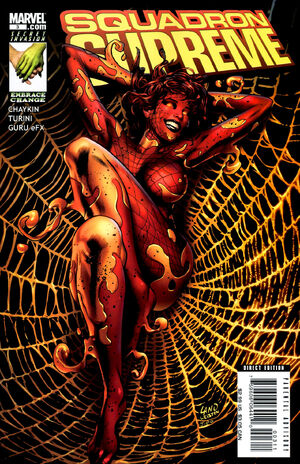 Sorry to pop in like this, Colonel Fury, but you're a hard man to get next to.

Appearing in "Power To The People, Part 3: Stand Or Fall!"Edit

Synopsis for "Power To The People, Part 3: Stand Or Fall!"Edit

At Edwards Air Force Base, Nick Fury has presented a cover story to Captain Brown of the FBI: he, Dr Burbank and Arcanna Jones were telepathically controlled to break the crew of the Icarus One loose. Since everone else who can confirm or deny is eiher unconscious or on the run, Captain Brown is content to concentrate on her next job: recovering the astronauts. Nick Fury thinks she will not have an easy job.

Out in the desert, Dr Boyer is using his powers to create crystal sculptures. The others want him to dial it back, but since his powers are entirely beneficial, he ses no reason to. A fight looks set to develop between Munn and Boyer, but Kathy seperates the two.

At the Veteran's Hospital in LA, a pair of suits from the Secret Service are trying to threaten Nick Fury, but manages to get them to back off. He wonders whether they will try to kill him with sodium morphate, and they claim that their agency does not use that tactic anymore. Arcanna, who has woken up, suggests that they get used to the idea that they will have to finish a fair game on a level playing field.

In Chicago, a trio of arsonists are trying to burn down a disused church. They are stopped by Nighthawk and the Blur, who have come to the conclusion that all of the superhuman strangeness of the last few days is in some way related to the Squadron Supreme.

In Eberhardt, Nebraska, Nell Ruggles is out for the night. Activating her powers, she begins swinging aroung around her downtown.

In the desert, the astronauts have seperated. Jon, Ted and Peter have gone for walks, and Kathy is using her powers to go walking with both Ted and Jon. The unhappiness inherent in Kathy and Ted's affair, coupled with Jon's transformation, means that Peter is the only one who is currently happy.

In New York, the Blur has come to meet Arcanna and get her opinions about the current spate of superhuman activity. She decides to tell him about the Icarus One astronauts.

In Washington, Nick Fury is met by Tucker Ford, the "mysterious flying samaritan", who reveals that he's decided to call himself Biogeneral. He briefly explains that he regards superhumans like Hyperion and Zarda as more dangerous than WMDs, so he wanted to build something to help him tip the scales. However, when other things began hapening at the same time, he has come to the conclusion that his "breakthrough" has the same origin as the recent weird activity. He offers the services of himself and his company to the US government to combat the superhumans. They are met by Colonel Blair from the Pentagon, who wants to find a home for the Old Solider, who just turned up in his office the previous day.

Suddenly, there is a phone call from Arcanna. Emil has woken, so she and the Blur have gone to visit him. Emil has his own goals in mind... and they start with Emil...

Retrieved from "https://heykidscomics.fandom.com/wiki/Squadron_Supreme_Vol_3_3?oldid=1454299"
Community content is available under CC-BY-SA unless otherwise noted.