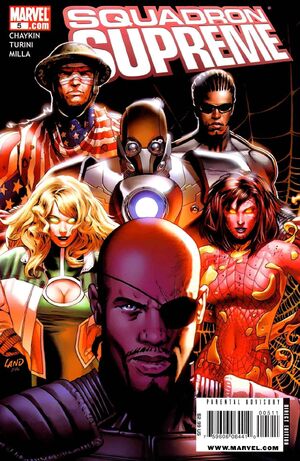 So they get to go kick ass, and you get stuck babysitting me.

Appearing in "Power To The People, Part 5: Overpowered!"Edit

Synopsis for "Power To The People, Part 5: Overpowered!"Edit

In Las Vegas, the Icarus One astronauts are going public about their powers and their treatment by the American government. Around the country, men and women who have done impossible things realize that something is happening.

In Washington, Nell Ruggles chooses this moment to wake up and escape from Nick Fury's group. However, Biogeneral is on hand to bring her down.

In Nevada, Emil Burbank has located Vaughn Zeldow, and is trying to convince him to use his powers to Burbank's ends. Zeldow has enough on his plate though, so he transforms back into Wolf, Ruler of the Winds, and flies away. Burbank is wise enough not to push the issue.

In Las Vegas, a group of soldiers from DHS have arrived, but the Icarus One astronauts hit back, keeping them off balance until Kathy, apparently unawares, teleports the foursome away.

In Washington, Fury is planning to recruit the Icarus One astronauts for his SHIELD organization. The group argues about the ethics of this decision.

At NLVU, Burbank has caught up with Brian Callahan. Callahan is far easier to convince than Zeldow.

SHIELD forces move to intercept the Icarus One foursome, leaving Biogeneral to "babysit" Ruggles. She expresses thoughts of revenge, but when she tries to use her powers, a collar activates and she is stunned by electricity.

In Las Vegas, the astronauts are found by Nick Fury's group. The fight is surprisingly even, until the Blur arrives, when he helps them defeat the astronauts. Kathy decides to take a chance, and convinces the others to go with Fury. Fury can deputize them as Agents of SHIELD.

In a bar, Burbank convinces Callahan to let him Do an experiment.

In another bar, former Supremor Edith Freiberg is on a drinking binge. She misses her old team-mates. However, as she staggers home after taking on an entire bar, she sees a strange green light...

Retrieved from "https://heykidscomics.fandom.com/wiki/Squadron_Supreme_Vol_3_5?oldid=1454301"
Community content is available under CC-BY-SA unless otherwise noted.