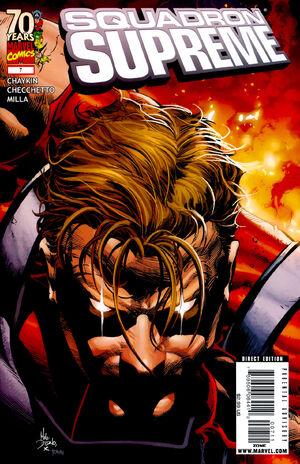 Appearing in "One Fine Day"Edit

Synopsis for "One Fine Day"Edit

At SHIELD headquarters in Washington, Hyperion and Doctor Spectrum have returned to Earth. Nick Fury and Arcanna ask them where they went for five years, and the two men explain that they went to look for Hyperion's point of origin after the Ultimate Power incident. They eventually tracked back to a desert planet, on which they found evidence of intelligent life... a cornerstone. A single cornerstone on the entire planet. Melancholy, the two men came home.

The news of their return is picked up by news media who wonder what will hapeen if they have another superhuman fistfight.

At Ford Biochemical's corporate headquarters, Nell Ruggles and Tucker Ford have been skirting around their mutual atteraction for two weeks. After a brief fight, they share a kiss, which is interrupted by a sudden visitor - Tucker's mother!

In Washington, hyperion greets the President. He says how sorry he is that he departed under such unfortunate circumstances, and she says that he has to work to be accepted. However, as he is leaving, Hyperion is accosted by the director of the CIA, who has a proposition for him. The two depart for the emergency stronghold known as "Iron Mountain", the most secure location in the continental US. Here, a group of power brokers tell him they want him to help them overthrow the President. Hyperion says he will think about it, and flies off through a hole in their wall

At SHIELD headquarters, the Icarus One astronauts have their own problems. Dr Boyer shows off his electrical powers to a press group, frightening them, while Ted, Jon and Kathy are arguing - now that both men know about Kathy's affair with Ted, they want her to choose between them.

Meanwhile, in Los Angeles, Emil Burbank has assembled a group of superhumans to further his own goals.

As the President leaves Washington with Nick Fury, Doctor Spectrum rsuhes to meet her. He tells her about Hyperion's meeting with the director of the CIA

In Malibu, CA, Arcanna and Amphibian are meeting for a chat about Hyperion and Doctor Spectrum. Hyperion tracks them there and tells them who he has been speaking with. He also tells them that he plans to double-cross the members of the coup...

Retrieved from "https://heykidscomics.fandom.com/wiki/Squadron_Supreme_Vol_3_7?oldid=1519451"
Community content is available under CC-BY-SA unless otherwise noted.