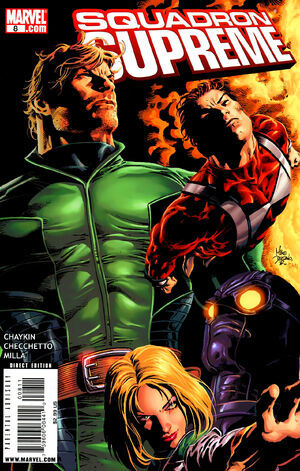 A voice... a spirit... it told me of an assembly of warriors... warriors who will be called to battle... a great battle with great coup.

-- Wolf, Ruler of the Winds

In Malibu, CA, Hyperion has informed Arcanna and Amphibian that he plans to take over the world. Arcanna hits back with her powers, and a fight ensues.

Over the United States, Doctor Spectrum is piloting the plane carrying Nick Fury and the President of the United States to Hyperion. However, he hears Kingsley's telepathic cry for help, and rockets ahead. With no-one to pilot the plane, Nick Fury begins an emergncy crash landing.

At Malibu, Arcanna finds herself overpowered. She hopes Amphibian will help her, but Doctor Spectrum rushes in and kisses her.

In Los Angeles, Emil Burbank has put his four new associates up in a house. He asks them to make themselves at home while he makes plans for them to strike, but they are planning to kill and betray him.

After his mother walked in on him and Nell Ruggles, Tucker Ford has taken the three iof them to dinner at a restaurant to talk. Tucker's mother and Nell do not get on, but Tucker is saved when Nick Fury calls and Nell to be superheroes in response to Hyperion's actions.

At SHIELD headquarters, the Icarus One astronauts are arguing about what to do next. Dr Boyer wants to use his powers, but Ted, Jon and Kathy want to argue about Kathy's affair. A stopgap is proposed - Kathy can use her powers to spereate herself into two bodies, thus allowing each man to "go steady". The group agrees that this may be the best for now, but they say they will talk about it later.

At Iron Mountain, the conspiracy members are arguing about what to do next. They are interrupted when Hyperion breaks into the facility - again - and informs them that he has managed to pull together a team of superhumans, and that with them, he will be taking over the conspiracy.

In Chicago, Nighthawk tracks down a child molester and throws him out a window. At that moment, the Blur catches up with Nighthawk and tells him about Hyperion's plans, but Nighthawk tries to talk him out of it, on the basis that it s none of their concern.

In Los Angeles, SHIELD's extant superhumans have been tasked to guard the body of Mangog. However, they are met by Wolf, Ruler of the Four Winds, who uses his powers to somehow resucsitate Mangog. He informs them that war is coming.

As Nick Fury drives along Mulholland Drive, Arcanna astrally projects into his car... just in time for both of them to hear about Hyperion's latest action... appearring in the sky over Washington and informing the world that it has changed...

Retrieved from "https://heykidscomics.fandom.com/wiki/Squadron_Supreme_Vol_3_8?oldid=1454304"
Community content is available under CC-BY-SA unless otherwise noted.