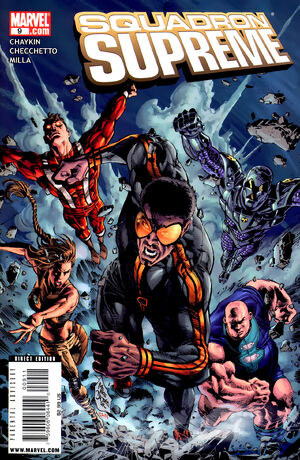 Appearing in "A Matter of Seconds..."Edit

Synopsis for "A Matter of Seconds..."Edit

In Washington, the President is aware that Hyperion has appeared above the White House. She is rushed to a bunker, and her first act is to phone Nick Fury looking for answers. Nick Fury is in California, and vows to send help as soon as he can.

In Los Angeles, a group of neutral superhumans led by Biogeneral agree to stand against Hyperion.

Elsewhere in Los Angeles, the crew of the Icarus one space mission decide that they will help as well.

Meanwhile, in Chicago, Nighthawk tries to convince the Blur that this is no business of either of theirs.

In Hollywood, Emil Burbank is awoken by one of his underlings with the news of Hyperion's actions.

At the secret stronghold codenamed "Iron Mountain", America's espionage chieftains discuss their roles in the conspiracy that Hyperion has co=opted.

Over the Pacific, Amphibian and Doctor Spectrum share a moment and decide to go to Washington.

In Washington, Hyperion's superhumans servants consider their role in events.

Over the White House, Hyperion gives a speech. He says that whether this scanario turns out good or bad is up

Suddenly, Biogeneral's group is teleported to Washington by the power of Wolf, Ruler of the Winds. The three flying men square up to Hyperion, leaving Nell to take on Inertia. Biogeneral fights the newly-arrived Doctor Spectrum, and Hyperion discovers that Wold and Mangog are good enough individually to give him a serious fight. Hyperion knocks down Mangog.

The Icarus One astronauts arrive at the site of Mangog's crashlanding, where they are ambushed by Hyperion's Squadron - including Blur - before both sides are attacked by Mangog.

As the two sides exchange blows, Nuke and Peter Boyer find themselves trading blasts. However, this causes a chain reaction which, despite the best efforts of Biogeenral and Doctor Spectrum, creates an explosion which destorys the White House... and the bunker containing the President.

As the news travels the world, a man in Ankara takes it as a sign from God - his time is now...

Retrieved from "https://heykidscomics.fandom.com/wiki/Squadron_Supreme_Vol_3_9?oldid=1454305"
Community content is available under CC-BY-SA unless otherwise noted.