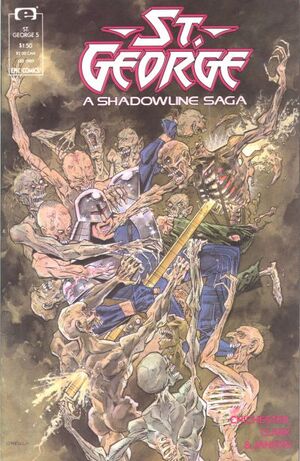 Appearing in "And It Is in the Dying..."Edit

Synopsis for "And It Is in the Dying..."Edit

Michael Devlin is the only one who might be able to stop the Shadow Dweller Wikka from claiming his three human sacrifices! But an even greater threat might turn out to be Michael's growing addiction to his St. George armor!

Retrieved from "https://heykidscomics.fandom.com/wiki/St._George_Vol_1_5?oldid=1614648"
Community content is available under CC-BY-SA unless otherwise noted.