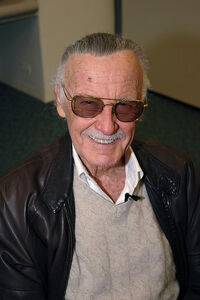 I'm no prophet, but I'm guessing that comic books will always be strong. I don't think anything can really beat the pure fun and pleasure of holding a magazine in your hand, reading the story on paper, being able to roll it up and put it in your pocket, reread again later, show it to a friend, carry it with you, toss it on a shelf, collect them, have a lot of magazines lined up and read them again as a series. I think young people have always loved that. I think they always will.

Stanley Lieber ( He would later change his name to Stan Lee.) was born on December 28, 1922. He was the co-creator of such popular characters as Spider-Man, the X-Men, Daredevil, The Incredible Hulk, Thor, The Avengers, and many more. One of his last creation's was She-Hulk. He is still alive today at the age of 90. The first issue that Stan Lee ever wrote was a text story from Captain America Comics #3. He wanted to leave around the time he wrote F.F. The only reason that he wrote the book was because his wife told him "do it your way. The worst they can do is fire you. And you want to quit any ways!"