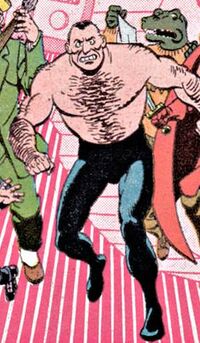 Ibac's alter-ego is Stanley "Stinky" Printwhistle, a crook who attempted to blow up a bridge, but was caught in the explosion. He is saved by Lucifer, who offers Printwhistle the chance to become a champion of evil in exchange for his mortal soul. Printwhistle accepts, and is told to speak the magic word "IBAC". By doing so, the frail, grey-haired criminal transforms into Ibac, a brutal muscleman with a buzz cut. Saying "IBAC" again transforms Ibac back into Printwhistle. Because he hasn't been able to defeat Captain Marvel, Printwhistle has not been obliged to give his soul to the devil, and has reformed, but being weak-willed, he has often been forced by other criminals into becoming the evil Ibac again.

While Captain Marvel is empowered by six mythological and Biblical figures, Ibac is empowered by four of the most evil and terrifying men to have ever walked the earth: Ivan the Terrible, who supplies Terror, Cesare Borgia, who gives Ibac Cunning, Attila the Hun, who gifts him with Fierceness, and Caligula, the sponsor of Cruelty. Also, while Captain Marvel transforms using magic lightning bolts, Ibac's transformations are accomplished with the power of mystical green fire and brimstone.

Power of Ibac: In order to change form, Stanley must be able to call upon the name of Ibac.

I for the Terror of Ivan the Terrible

B for the Cunning of Cesare Borgia

A for the Fierceness of Attila the Hun

C for the Cruelty of Caligula

Retrieved from "https://heykidscomics.fandom.com/wiki/Stanley_Printwhistle_(Earth-S)?oldid=1676634"
Community content is available under CC-BY-SA unless otherwise noted.