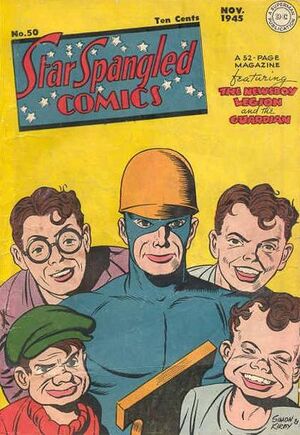 Appearing in "The Leopard Man Changes His Spots"Edit

Synopsis for "The Leopard Man Changes His Spots"Edit

All four of the Newsboy Legion are walking home, after midnight, from seeing a very scary movie, featuring the freakish Leopard Man. Within one page, Scrapper tells us three times how not-scared he was. They meet Officer Jim, and he walks along with them, then they hear the sound of a mugging, and jump into a melee with three gangsters. They whomp the gangsters until they run away, but the mugging-victim stops Jim from pursuing them, because he doesn’t want any more trouble with “Leo.” He turns out to be Garry Wilkens, the mild-mannered somewhat-timid actor who plays the Leopard Man. He’s being shaken down by an extortionist, and is ready to cave in and pay him off, but Jim’s not having it; he’ll get his close personal friend The Guardian to look into this. As usual, Scrapper ridicules Jim for pretending to not be T.G., but as usual Jim sticks to his role.

The next day the boys go visit Wilkens at luxurious Summit Studios. There’s a caged leopard on the grounds, in a circus wagon. They meet Mr. Summit, the Producer, and he agrees with the boys that it’s critical for Garry not to give in and pay the blackmailers, mainly because it would be bad for business.

Meanwhile at his palatial lair, a very displeased Leo is deciding that Wilkens needs to turned into an example, especially after yesterday’s escapade, and he’s personally going to take a hand in it. Leo has a stooge planted among the Summit Studios employees, and this guy headkonks a security guard, steals his uniform, and lets Leo and a carful of thugs into the studio. Arriving just then, the Guardian observes this, and then comes through the gate, much to the consternation of the fake guard, who alerts his boss.

Meanwhile the boys are wandering around the studio grounds and find the leopard, out of its cage, sleeping on the ground. Scrapper yells at the cat and tells it to get back in its cage, while the others caution him that this is very unwise. Then they hear the sound of a beat-down taking place nearby. On one set they find Leo shaking down Garry, and Garry caving in; the four newsboys, but especially Scrapper, pile onto this creep, but he’s holding his own, until the Guardian kicks in the door. Melee ensues, these craven punks get wadded up like wastepaper within one panel, then the leopard wanders into the room. At random, it jumps onto the Guardian; he catches it on his bulletproof shield, and maneuvers the cat between himself and the gunmen, who stop shooting because the cat seems to be winning. The Guardian soon gets the leopard in a half-nelson, and it loses consciousness, so now the guns come back out, but just then, Garry Wilkens runs in, dressed in his Leopard Man outfit, and gives the bad guys a good scare, then the Guardian and his team give them a good thrashing.

Some studio workers put the leopard back into its cage, Garry Wilkens renegotiates his contract with Mr. Summit, and the Newsboys go on back to work in the big city.

Retrieved from "https://heykidscomics.fandom.com/wiki/Star-Spangled_Comics_Vol_1_50?oldid=1380473"
Community content is available under CC-BY-SA unless otherwise noted.