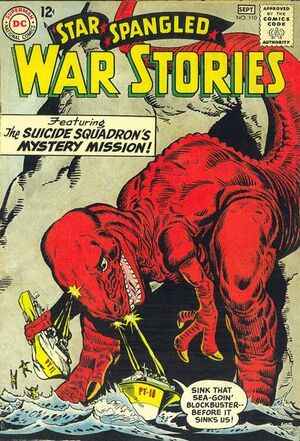 Appearing in "Tunnel of Terror"Edit

Synopsis for "Tunnel of Terror"Edit

The Suicide Squad's PT Allan takes out the Professor into the Pacific to investigate ancient writings that describe of a gigantic white gorilla that clashed with Dinosaurs millions of years ago and protected ancient cavemen.

After a raging storm, they follow another PT Boat to an island where they witness it being attacked by a Tyrannosaurus Rex. When the prehistoric beast goes after them first PT Boat, it next turns it's attention on the crew of Allan's boat. They fare better by firing a torpedo at the beat, killing it. Resuming their course, they end up battling a flock of Pterodactyls, blasting them out of the sky by launching their depth charges.

They pull to shore near a giant cave and go exploring and inside the Professor finds similar cave paintings depicting a gigantic white ape protecting cavemen from Dinosaurs. Just then they are attacked by a Brontosaurus and in blowing the creature up they accidentally cause a cave in, trapping them inside the cavern. They are not trapped for long, as through an opening in the roof, the giant white ape pulls up the Professor and vanishes. With Professor then throws down a rope ladder so that the rest of the men can escape.

Back at sail, the group is told about the Professor's encounter with the giant white gorilla when they are suddenly attacked by a swarm of Dinosaurs. When it seems they are about to be smashed to bits, they are saved by the white gorilla who lifts them to safety and fights off the Dinosaurs single handed. When it appears that the white gorilla is out numbered and doomed to fail, the PT Boat is forced to fire a torpedo at the mass of ancient beasts, killing them all including the white gorilla. As the PT Boat sails on, the gorilla, dying, waves good bye to the people it's saved.

Retrieved from "https://heykidscomics.fandom.com/wiki/Star-Spangled_War_Stories_Vol_1_110?oldid=1458490"
Community content is available under CC-BY-SA unless otherwise noted.