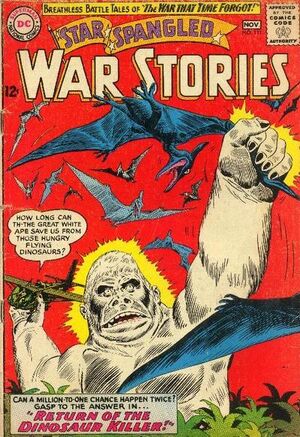 Appearing in "Return of the Dinosaur Killer!"Edit

Synopsis for "Return of the Dinosaur Killer!"Edit

Going to their glider and waiting for pick up they are attacked by Japanese troops. However their pick-up plane manages to pull them out of the battle field and away from the troops. They are next attacked by a group of Japanese fighter jets and the glider is shot loose. This happens over the cloud that is over Dinosaur Island and upon passing through the glider is attacked by an even deadlier threat, a flock of Pterodactyls.

They manage to escape the bids of prey and land safely on the ground. There they are attacked by a giant lizard that PT kills with his grenades. Diving into the water below, the two explorers find themselves surrounded by various Dinosaurs. However, as the beasts fight amongst each other, they are pulled out of the scene by another giant white gorilla -- supposedly the son of the original. Who fights off the Dinosaurs and takes them back to their glider.

There, the white gorilla fights off the swarm of Pterodactyls and toss the glider back through the cloud and back into the middle of the fight with the Japanese. Although PT and the Professor are shot down, US fighters arrive on the scene and fight off the Japanese and the pair are rescued shortly thereafter.

Appearing in "The Brainwashed Jet"Edit

Synopsis for "The Brainwashed Jet"Edit

Retrieved from "https://heykidscomics.fandom.com/wiki/Star-Spangled_War_Stories_Vol_1_111?oldid=1458491"
Community content is available under CC-BY-SA unless otherwise noted.