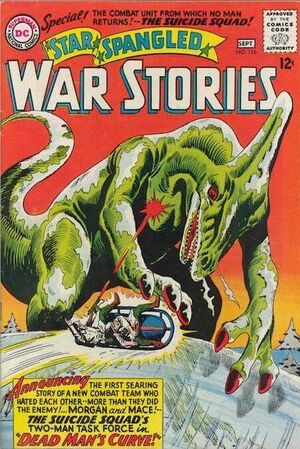 Appearing in "The Suicide Squad!"Edit

Synopsis for "The Suicide Squad!"Edit

Andy Mace was an Olympic tobogganer paired up with Bill Morgan, during a gold medal run Morgan pushed Mace to faster than he could control leading to a crash that would fatally injure Morgan and make them lose the chance at a gold medal. Bill's brother Vic, watching the tragedy on television would blame Mace for panicking and causing his brothers death and failing his country.

Both Andy and Vic would enter into the military during World War II and both become members of the Suicide Squad. They are both assigned to a mission to destroy an enemy missile silo located in an arctic region. When they parachute in, Morgan breaks his leg and, determined to make sure that Mace doesn't hit the "panic switch" forces Mace to continue on the mission by pulling Morgan along on a toboggan with a .45 trained on him.

They encounter Dinosaurs along the way, and Mace uses various explosive devices to kill each of the threats, the whole time Morgan is threatening to shoot Mace at the first indication that he is chickening out. Finding the missile silo, they are attacked by two Dinosaurs, forcing Mace to make them bail out of the explosive laden toboggan. When Morgan attempts to shoot Mace due to his perception that Mace has chickened out, Mace punches him out. The toboggan full of explosives then explodes, destroying their target and killing one of the Dinosaurs, the other is killed when Mace tosses a grenade at it.

Locating a destroyed sub, Mace patches up Morgan's leg and uses it's still functioning radio equipment to send out an SOS. Morgan is surprised to find that Mace didn't chicken out this time, but at the congratulatory ceremony vows to always go on missions with Mace to make sure he doesn't manic again.

Retrieved from "https://heykidscomics.fandom.com/wiki/Star-Spangled_War_Stories_Vol_1_116?oldid=1458496"
Community content is available under CC-BY-SA unless otherwise noted.