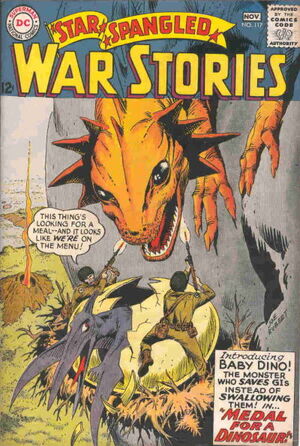 Appearing in "Medal for a Dinosaur"Edit

Synopsis for "Medal for a Dinosaur"Edit

Morgan and Mace are selected by the Suicide Squad's commander to retrace the voyage of an experimental plane in order to learn how it went missing. As usual, Morgan is putting on extra pressure on Mace to not "panic" due to Morgan's misconception that Mace panicked during the Olympics, killing Morgan's brother and losing the gold for the USA. They follow the same flight path as the original test plane and end up on a uncharted island where they are attacked and downed by a Brontosaurus, however they kill the prehistoric beast with the planes missiles.

Leaving in their tank, they are picked up by a Pterodactyl, which they blast out of the sky, landing them in the water where they blow up a prehistoric fish and have to abandon their tank. Continuing on foot, they fight off various Dinosaur menaces and begin scaling the side of a mountain. During a fight with some more Dinosaurs, the duo are knocked into a Pterodactyl nest where one of it's eggs is just hatching. Because Mace rescues the baby Pterodactyl from a giant snake, the creature befriends them, however Morgan refuses to let it follow them and forces Mace to continue along on their mission.

When they are attacked by a grown Pterodactyl, the "Baby Dino" comes to their rescue, carrying them off to the beach where they are safe, there they construct a raft and the Baby Dino helps them out to sea. Despite how Mace performed, Morgan still believes that "cowardly" Mace needs an eye kept on him.

Retrieved from "https://heykidscomics.fandom.com/wiki/Star-Spangled_War_Stories_Vol_1_117?oldid=1458497"
Community content is available under CC-BY-SA unless otherwise noted.