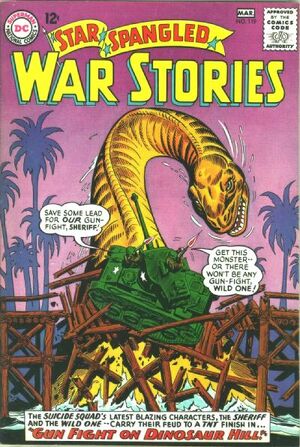 Sheriff and Wild One hail from the town of Dusty Hollows, where the Sheriff would out draw and disarm Wild One in a draw and arrest him. Wild One would vow to get back at the Sheriff, however the war started and both were drafted into the military. The Sheriff would end up in the Suicide Squad, and as coincidence would have it when the Squad asks him to break in a new recruit into the group, it turns out to be Wild One.

Send out on a mission aboard a sub, the Sheriff finds that Wild One still is carrying his grudge toward the Sheriff and hopes to finally get revenge. However, before things can go further their sub is attacked by a giant turtle, sending both Sheriff and Wild One out in scuba gear to investigate. They pin the gigantic turtle with a sub's anchor and then kill it with a torpedo. When the blast knocks out Wild One, the Sheriff brings him back aboard the ship where the Wild One calls the Sheriff a fool for rescuing because he's sealed his own fate.

Taking a raft toward an island they are attacked by another giant sea creature, however Wild One kills it with a grenade. Swimming ashore, they take an enemy tank to travel to the location where they have been charged with constructing a coast watching station. Along the way they are attacked by a Brontosaurus which they easily destroy with the tank, however the vehicle is knocked on it's side and they are forced to abandon it.

Retrieved from "https://heykidscomics.fandom.com/wiki/Star-Spangled_War_Stories_Vol_1_119?oldid=1458499"
Community content is available under CC-BY-SA unless otherwise noted.