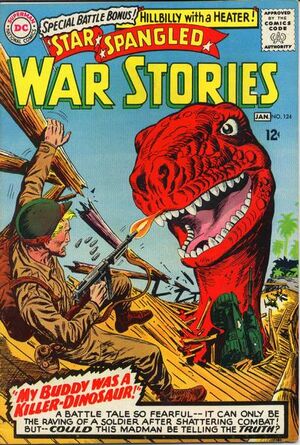 Appearing in "My Buddy - The Dinosaur!"Edit

Synopsis for "My Buddy - The Dinosaur!"Edit

A soldier named Art is found adrift at sea and raving mad, taken to an army medical tent they are told a fantastic story:

Art was out with his buddy named Vic, who was obsessed with vampires and werewolves and insists that they truly exist. Their ship is attacked by a prehistoric sea-creatures and a Pterodactyl. With fast thinking the troops manage to destroy all the creatures attacking them and manage to get ashore. However, they are attacked by a Triceratops, which they destroy with their tank.

As their ranks are thinned out by a mysterious Tyrannosaurus that attacks at night, Vic insists that he is a were-dinosaur, turning into the Tyrannosaurus at night and attacking. It isn't until one night when Art sees this creature face to face and hears it speaking in his friends voice does he believe it. Vic begs Art to put him out of his misery, and Art complies by blasting the Dinosaur with his tank. To his surprise and horror the dinosaur turns back into his buddy, the experience driving him mad, he was found at drift shortly there after.

Hearing the end of the story the military doctor can only assume that the soldier is mad and the death of his troops a mystery, however Art insists that his buddy was a dinosaur.

Appearing in "Hillbilly with a Heater!"Edit

Synopsis for "Hillbilly with a Heater!"Edit

Retrieved from "https://heykidscomics.fandom.com/wiki/Star-Spangled_War_Stories_Vol_1_124?oldid=1458504"
Community content is available under CC-BY-SA unless otherwise noted.