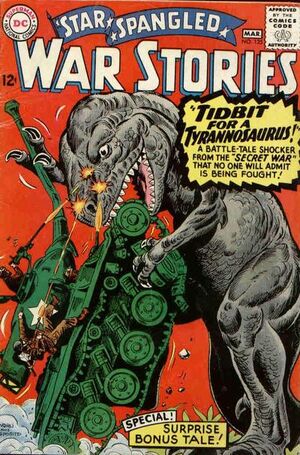 Appearing in "Tidbit for a Tyrannosaurus!"Edit

Synopsis for "Tidbit for a Tyrannosaurus!"Edit

Reed, a member of the Suicide Squad, is assigned to test out the newest model of the G.I. Robot, nicknamed Mac, out into the battle field to see how well it performs in combat. Skeptical at first, Reed is given a first hand lesson on how combat trained the robot really is. Reed learns that his first mission is to track down the original G.I. Robot that has gone missing in action with other members of the Suicide Squad.

While being air dropped, their ship is attacked by a swarm of Pterodactyls, necessitating for Reed and Mac to jump ship. They are attacked by Pterodactyl's, however the dup manage to fight them off with grenades, and although their parachutes are damaged, they hold on to each other so each parachute can compensate for the damage done to the other.

They land of the back of a Brontosaurus where Reed attempts to kill the creature with a grenade, however it swats him away, making him drop the grenade. When the G.I. Robot shields Reed from the blast without being ordered, Reed begins to wonder if the robot has a mind of it's own. He is still injured from the blast and the robot carries him through the jungle until they come across a Tyrannosaurus Rex attacking a tank battalion.

They are only able to rescue Sgt. Trask who was thrown from the tank and is half mad wanting to save his troops, however Reed tries to stop him. When Trask attempts to shoot Reed, Mac shoves Reed out of the way and deflects all the bullets without any orders to do so. Then as both men marvel over this, the robot attacks the approaching T-Rex with a live grenade, sacrificing itself to save both Reed and Trask.

In the aftermath, Reed mourns the loss of Mac, whom he had just begun to think of as more than just a robot, but a fellow soldier.

Appearing in "A Navy Named Smith!"Edit

Synopsis for "A Navy Named Smith!"Edit

Retrieved from "https://heykidscomics.fandom.com/wiki/Star-Spangled_War_Stories_Vol_1_125?oldid=1458506"
Community content is available under CC-BY-SA unless otherwise noted.