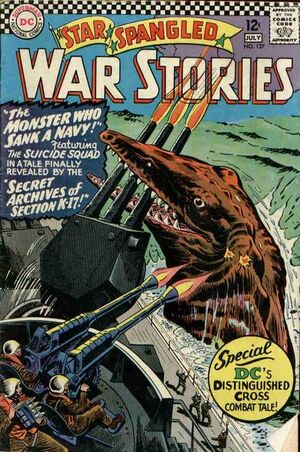 Appearing in "The Monster Who Sank a Navy!"Edit

Synopsis for "The Monster Who Sank a Navy!"Edit

Peters and Talbot of the Suicide Squad are sent on a mission to stop an enemy vessel, the Kuruna, from using a new deadly form of nerve gas that the Japanese have developed. Getting dropped off at sea in a rubber raft, the two frogmen sail into a strange fog. Their drop off plane is attacked by a Pterodactyl which they easily blast out of the sky.

Diving after the downed plane they are attacked by a giant fish that sucks Talbot into it's mouth and swims away. Peters goes to the rescue of the downed plane but it and Peters is sucked into the mouth of another arriving sea creature looking for a meal. Forced to abandon the plane, Peters uses a his charges to blast himself free from the creature and kill it at the same time.

Surfacing he is attacked by the same fish that swallowed Talbot, however before it can swallow Peters as well Talbot blasts his way out of the monster fish killing it. Carrying the unconscious Talbot, Peters witnesses as an enemy sub is torn in two by another prehistoric creature. Before they can do anything they are knocked out by a team of Japanese divers. When Peters comes around he finds himself aboard the Kuruna and that Talbot has been driven insane from his experiences.

When the Japanese soldiers are about to execute Peters and Talbot, Peters makes a break for the nerve gas in a ditch effort to destroy him. Although the Japanese soldiers manage to stop him, they are soon attacked by the same creature that attacked the sub. With no choice, Peters helps the Japanese army try to fend off the creature, but it's not until the stark raving mad Talbot throws the nerve gas at the monster is it destroyed, however it ruins the Japanese ship forcing Peters and Talbot to abandon ship. With the mission accomplished the two report back to base.

Appearing in "The Mustang Had My Number"Edit

Synopsis for "The Mustang Had My Number"Edit

Retrieved from "https://heykidscomics.fandom.com/wiki/Star-Spangled_War_Stories_Vol_1_127?oldid=1458509"
Community content is available under CC-BY-SA unless otherwise noted.