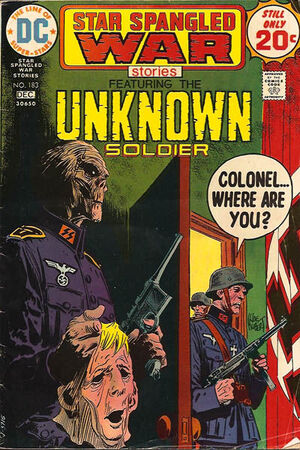 And so it ended. I suppose I should have been pleased. History would call it a miracle--8,000 innocents saved from a madman's schemes...Only history has a way of praising results--And forgetting the rest...And that, regretfully, is sometimes difficult...for a man...

September 1943, Allied intelligence learns of Adolf Hitler's "hand off" agreement concerning the Jews in occupied Denmark has been broken and the Nazis intends to deport the Danish Jews to the death camps. In response, the Danish resistance arranged to ship 8,000 Jews to Sweden for safety. Unfortunately, the head of the Gestapo, Colonel Scheiben von Kleeg, already learns of their plan. The Unknown Soldier is assign to impersonate a dead SS Captain named Shreik, who was being sent to take part in von Kleeg's mission, and to prevent it from happening.

The Unknown Soldier is airdropped into Copenhagen and meet von Kleeg. However, von Kleeg is suspicious due to the real Shreik's untimely disappearance and had the Unknown Soldier passing a "test" by surviving an attack from von Kleeg's best men. Once the Soldier effortlessly best von Kleeg's men and thereby passing the test, von Kleeg assigns him to oversee a Jewish collaborator named Inger, who is willing to avoid persecution by revealing the identities of hidden Jews.

The next morning, the Unknown Soldier escort Inger down a street. Suddenly a gunman tries to kill Inger for her collaboration with the Nazis. The Soldier saves Inger and her assassin is gunned down. Inger sadly revealed the gunman to be her brother. The Soldier's selfless action in protecting Inger brings more suspicions from von Kleeg.

Much later, von Kleeg assigns the Soldier in leading the attack on the Jews' point of evacuation. But to ensure the Soldier's cooperation, von Kleeg orders him to personally execute Inger as she is declare expendable. Realizing the stake of the mission and the lives depending on it, the Soldier very reluctantly does so.

On the night of the planned SS attack, the Danish resistance ambushed the SS. Upon von Kleeg learning about the ambush, he is confronted by the Soldier, who sheds off his disguise and brutally guns him down with a submachine gun. The evacuation is a success, but at a regretful cost over a single life.

Appearing in "To End In Flames, Part III"Edit

Synopsis for "To End In Flames, Part III"Edit

Hans von Hammer swear to finish his duel with his American counterpart, Steve Savage, the "Balloon Buster". In the end, both pilots of equal cunning and skills, leave the Enemy Ace the victor of the skies. Savage, who is believed to be dead by von Hammer, recovers in a French hospital and swearing to face the Enemy Ace again.

Retrieved from "https://heykidscomics.fandom.com/wiki/Star-Spangled_War_Stories_Vol_1_183?oldid=1458585"
Community content is available under CC-BY-SA unless otherwise noted.