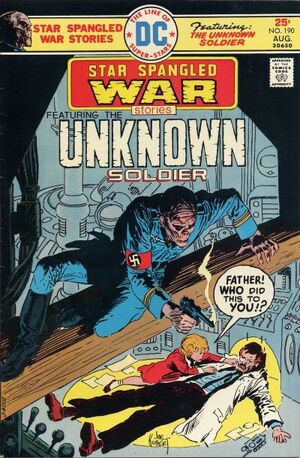 Got to fake it!

The Unknown Soldier, disguised as Nazi Colonel Rolf, investigates a mysterious Top Secret Nazi experiment. Unfortunately, Dr. Schopfer, a scientist forced to work for the Nazis under threats to his daughter, wants to kill Colonel Rolf.

Just outside Stalingrad, on the Russian Front, a Nazi wonders, “Who will mourn for Corporal Kruger” and befriends a stray dog.

Retrieved from "https://heykidscomics.fandom.com/wiki/Star-Spangled_War_Stories_Vol_1_190?oldid=1458592"
Community content is available under CC-BY-SA unless otherwise noted.