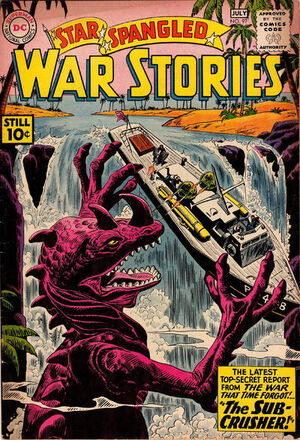 After a US Submarine is found crushed on the shore, the US army sends a team of soldiers out on a PT Boat to find and destroy what army intelligence believes to be a new weapon created by the Japanese army. However, while out at sea the cause proves to be even more fantastic than anyone originally thought: The subs are literally being crushed in the hands of a gigantic prehistoric creature.

Although another sub is destroyed, the PT boat soldiers on and comes face to face with the ship crusher when it catches the boat after it pilots off a waterfall. Killing the creature, the soldiers find that they now must ferry their way through the waterways of an uncharted island filled with prehistoric dangers. They are first attacked, and succeed in killing a gigantic ape that attempts to crush them with gigantic boulders and trees, although the attack expends the last of their bullets.

They have to resort to guile and quick thinking when being attacked by gigantic alligators, when they fire torpedoes at the creatures they miss, however it allows them the time to speed past the beasts. One of their torpedoes is picked up by a Pterodactyl who drops it on their ship destroying it and killing all it's crew except one.

The lone survivor is about to be attacked by both the gators and the Pterodactyl when he finds the second torpedo and when the three beasts fight over each other launches it at them killing them in an explosion. Picked up by an air rescue team, the soldier reports back to his superiors who then sanction an air raid of the island destroying it totally.

Appearing in "The End of Lady Luck"Edit

Synopsis for "The End of Lady Luck"Edit

Retrieved from "https://heykidscomics.fandom.com/wiki/Star-Spangled_War_Stories_Vol_1_97?oldid=1458476"
Community content is available under CC-BY-SA unless otherwise noted.