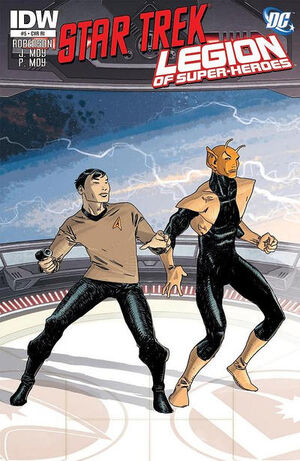 Forget it, captain. It is not going to happen.

Vandar the Stone's collections of time machines seem to include: Dr. Who's TARDIS, the Flash's Cosmic Treadmill, a Time Bubble, the car from "Back to the Future", H.G. Well's "Time Machine", a "Hot Tub Time Machine", a StarGate, and several others.

Retrieved from "https://heykidscomics.fandom.com/wiki/Star_Trek/Legion_of_Super-Heroes_Vol_1_5?oldid=1522186"
Community content is available under CC-BY-SA unless otherwise noted.