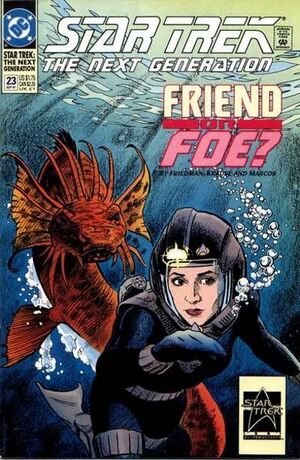 Troi discovers a sentient race, imprisoned by another race, to be left behind by the evacuation. The shuttle crew joins the group that reeled them in to defend against an attack by the hostile group. They are fighting for possession of a ship which may be able to take them back to civilization.

Retrieved from "https://heykidscomics.fandom.com/wiki/Star_Trek:_The_Next_Generation_Vol_2_23?oldid=1458324"
Community content is available under CC-BY-SA unless otherwise noted.