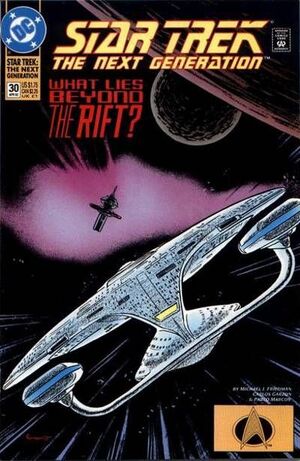 Riker risks everything to help a space station before it is swallowed by a wormhole. All station personnel are transported to the Enterprise, but Riker is still aboard when it enters the wormhole. On the other side, he discovers others who have been trapped and who are now insubstantial ghosts of their former selves.

Retrieved from "https://heykidscomics.fandom.com/wiki/Star_Trek:_The_Next_Generation_Vol_2_30?oldid=1458331"
Community content is available under CC-BY-SA unless otherwise noted.