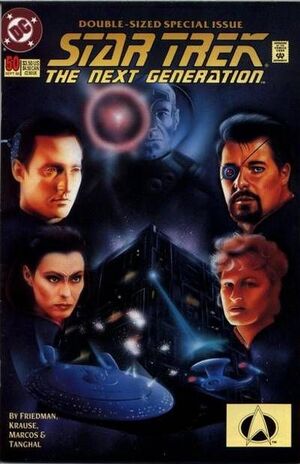 Appearing in "And Death Shall Have No Dominion"Edit

Synopsis for "And Death Shall Have No Dominion"Edit

Worf, from the battle section crew, has died like a warrior. The Borg ship begins chasing the battle section. Both Rikers head for the bridge to deal with the Borg ship while Picard, Data, and the others attempt to link with the Borg mind-net through Locutus, as they did once before. Data gives the "sleep" command, but this mind-net has better access barriers and it fails. Judging Captain Riker's plan a failure, Shelby mutinies. She abandons the battle section to its fate and turns the Enterprise back to Earth. Wesley and O'Brien defy her orders and are forced to stun her. Concentrating on destroying the battle section, the Borg ship leaves itself open to attack from the rear by Enterprise. Determined to enlist the aid of the imprisoned spirit of his counterpart, Picard whispers something to Locutus. Picard/Locutus responds with the word "eat". Data sends the "eat" command to the Borg consciousness. All Borg activity stops as every Borg tries to feed, draining all power from the Borg ship and destroying the mind-net link to Earth. Captain Riker reassures Picard that he will help the Enterprise return to its own universe. The crews of each ship make their farewells. In the battle section sickbay, Picard's counterpart awakens and warns Picard that the rift is closing. Picard/Locutus had used the power of the Borg consciousness to create the rifts, hoping that someone would come to help. Both ships rush to the closing rift. On board the battle section, O'Brien is found in a cargo hold, stunned by a phaser. His counterpart has beamed aboard the Enterprise to be with a family once again, but he gives himself up and returns to the battle section. With their O'Brien safely aboard, the Enterprise returns home.

Retrieved from "https://heykidscomics.fandom.com/wiki/Star_Trek:_The_Next_Generation_Vol_2_50?oldid=1458351"
Community content is available under CC-BY-SA unless otherwise noted.