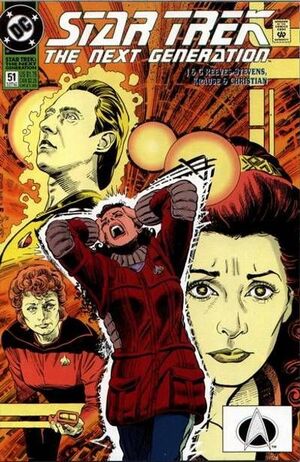 Investigating an unexpected supernova, an Enterprise away team discovers an exposed shelter on a nearby planet. The shelter was originally two kilometers below the surface and Troi senses some kind of life inside. She touches the shelter and is knocked unconscious by an energy discharge. Troi recovers in sickbay and Dr. Pulaski (The Child) finds no damage. Data and Geordi use the ship's phasers to cut the shelter open but don't find any life forms. When the away team beams back to the ship, several energy creatures from the shelter transport with them and enter the ship's systems. The creatures begin draining power from the ship while the nearby star shows signs of going nova again. Troi communicates with the creatures and learns that they feed on stellar nova and were responsible for the nova under investigation. To prevent them from using the Enterprise to travel through Federation space creating supernovae, Data devises a scheme to contain the creatures. He succeeds, but it nearly costs him his life and Troi senses something in Data for the first time.

Retrieved from "https://heykidscomics.fandom.com/wiki/Star_Trek:_The_Next_Generation_Vol_2_51?oldid=1458352"
Community content is available under CC-BY-SA unless otherwise noted.