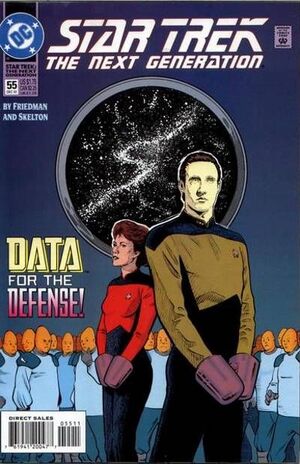 Appearing in "The Good of the Many"Edit

Synopsis for "The Good of the Many"Edit

Data and Captain Louvois are uninjured after an alien ship collides with their disabled shuttlecraft. The occupants of the other vessel are not so lucky. A second alien vessel appears. Data and Louvois are arrested for "disproportionate destruction of lives" and brought to trial by the Terviorii. Their legal system is dedicated to the welfare of the majority and since nine individuals lost their lives, Data and Louvois have no defense. Data tries and fails to argue their case. Captain Louvois argues that Data is a unique life-form, the sole representative of his race, therefore his rights "outweigh those of any group comprising less than an entire race". Her argument convinces the Terviorii to drop all charges. Meanwhile, back on the Enterprise: Dr. Crusher sends a message to Wesley, detailing her recent encounter with Q; the Klingon flowers in the garden are doing poorly and Worf misses Keiko O'Brien's botanical skills; Picard reaffirms his support for Riker after receiving a copy of Captain Jellico's report on his tenure as commander of the Enterprise; and Lwaxana Troi arrives for another visit.

Retrieved from "https://heykidscomics.fandom.com/wiki/Star_Trek:_The_Next_Generation_Vol_2_55?oldid=1458356"
Community content is available under CC-BY-SA unless otherwise noted.