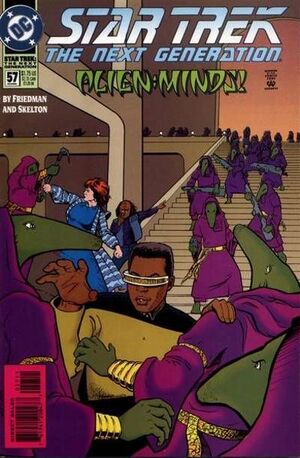 Appearing in "Of Two Minds"Edit

Synopsis for "Of Two Minds"Edit

Worf/Lwaxana, Deanna/Alexander, and Selar/Geordi fight their way past Eregean guards, taking advantage of skills from both minds in each body. Aboard the Enterprise, the Sakerions inform Picard of Eregean mind transfer techniques and the strong likelihood that the Enterprise crew members were kidnapped to serve as hosts for the ruling Eregean triumvirate. When Lwaxana, Alexander, and Geordi escape via transporter, Picard must find the bodies belonging to Worf, Deanna, and Selar before it is too late to transfer their minds back.

Retrieved from "https://heykidscomics.fandom.com/wiki/Star_Trek:_The_Next_Generation_Vol_2_57?oldid=1458358"
Community content is available under CC-BY-SA unless otherwise noted.