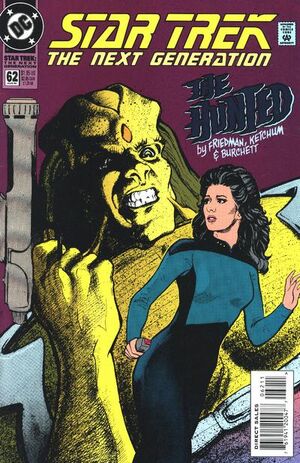 Dazed and confused, Deanna Troi is confronted by the killer of Dr. Crusher and Riker. When he kills her companion, Troi runs. The killer chases her into a large building, taunting her as she dodges his energy bolts. Running down one hallway after another, Troi finds Worf's body and his phaser. She turns a corner and finds the killer. As she holds him at phaser-point he advances, but she can't bring herself to fire at him. Troi awakens to find heself surrounded by her shipmates. Picard reminds her that the Thrakkite ambassador has been murdered and Troi was one of two suspects. Their hosts, the Talquosians tested her innocence by inducing a dream scenario wherein Troi was given every opportunity to kill the victim. The real killer confesses and briefly puts up a fight, until Troi convinces him to give himself up.

Retrieved from "https://heykidscomics.fandom.com/wiki/Star_Trek:_The_Next_Generation_Vol_2_62?oldid=1458363"
Community content is available under CC-BY-SA unless otherwise noted.