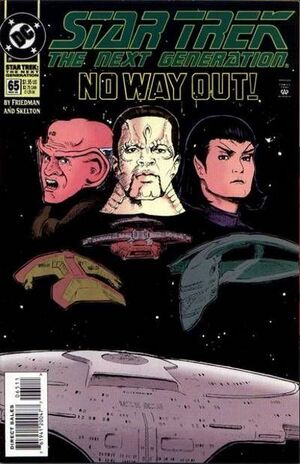 Appearing in "The Truth Elusive"Edit

Synopsis for "The Truth Elusive"Edit

The alternate Geordi's ploy to get the drop on his counterpart fails because of Troi's presence and he can't offer any proof that both away teams are in his universe. On the Enterprise, Picard solves the puzzle of Tavorak's story, realizing that the Romulan's motivation is profit. One of Geordi's ensigns determines that they are in the alternate universe and the functioning runabout is given to the alternate away team to try and complete their mission, while their counterparts make plans to repair the other runabout and attempt to return to their own universe. Picard convinces Tavorak that he will be safer seeking asylum from the Federation, rather than selling his virus to the highest bidder. Geordi and his away team make it back to their own universe, but will never know whether their counterparts successfully completed their mission.

Retrieved from "https://heykidscomics.fandom.com/wiki/Star_Trek:_The_Next_Generation_Vol_2_65?oldid=1458366"
Community content is available under CC-BY-SA unless otherwise noted.