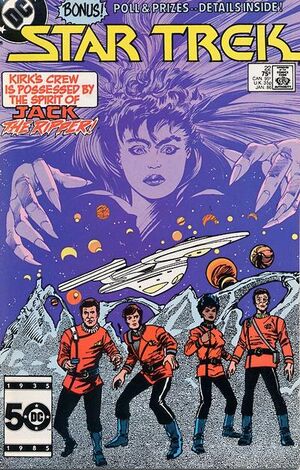 Appearing in "Wolf on the Prowl"Edit

Synopsis for "Wolf on the Prowl"Edit

Redjac (Wolf in the Fold) returns to spread fear and murder aboard Excelsior, and to take revenge on Kirk. Lured to a planet whose inhabitants worship Redjac, Kirk and his landing party discover that Redjac inhabits the body of one of their own.

Retrieved from "https://heykidscomics.fandom.com/wiki/Star_Trek_(DC)_Vol_1_22?oldid=1458164"
Community content is available under CC-BY-SA unless otherwise noted.