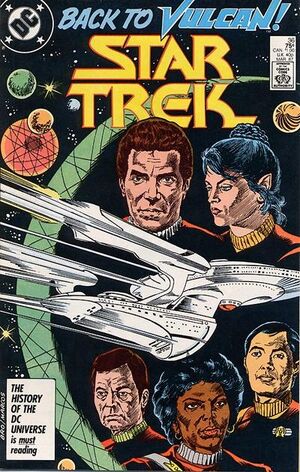 Scotty uses a modified transporter to filter the doomsday bug from the Romulans. Spock's body recovers from the effects of the plague but his mind is in chaos. Kirk and his closest friends take a bird-of-prey to Vulcan to get help.

Retrieved from "https://heykidscomics.fandom.com/wiki/Star_Trek_(DC)_Vol_1_36?oldid=1458177"
Community content is available under CC-BY-SA unless otherwise noted.