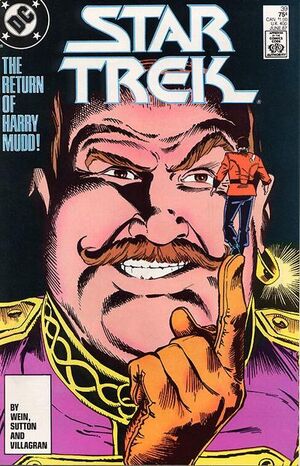 Appearing in "When You Wish Upon a Star"Edit

Synopsis for "When You Wish Upon a Star"Edit

Trapped by an unknown force, the Enterprise is taken to an unexplored planet. A landing party led by Spock attempts to transport to the surface, but Kirk, McCoy, and Scotty are transported with them. They find themselves on some kind of amusement planet ruled by Harry Mudd.

Retrieved from "https://heykidscomics.fandom.com/wiki/Star_Trek_(DC)_Vol_1_39?oldid=1458180"
Community content is available under CC-BY-SA unless otherwise noted.