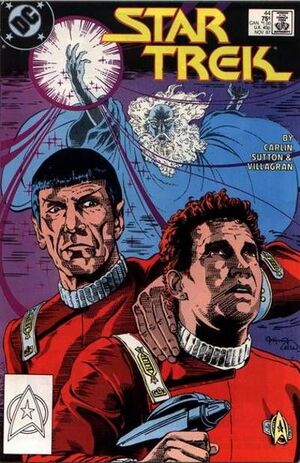 The followers of Vaal capture Kirk and his landing party for a sacrifice. They use powers taught by Vaal to draw the Enterprise out of orbit, to the surface. Spock convinces them to stop by offering to restore Vaal. Scotty sends a team of storm-troopers to free the landing party. Spock has been plugged into Vaal's systems.

Retrieved from "https://heykidscomics.fandom.com/wiki/Star_Trek_(DC)_Vol_1_44?oldid=1458188"
Community content is available under CC-BY-SA unless otherwise noted.