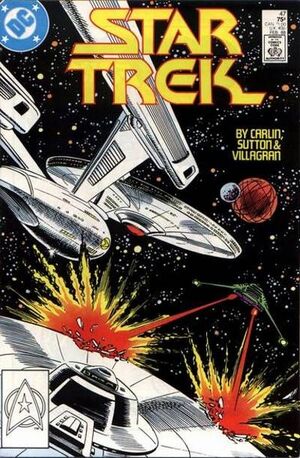 Stardate 9219.7
A landing crew from the USS Cluster are ambushed by Romulans and Captain Edward Fields is killed. When his second-in-command, Ronald P. Penn hears the news, he swears to avenge Fields' death by striking back at the Romulans. The inexperienced acting Captain breaks Federation protocol and pursues the Romulan vessel into disputed territory. Inspired by the actions of the legendary Captain James T. Kirk, Penn attempts to duplicate Kirk's intuition and creative battle strategies. Penn's tactical ineptitude plunges him into a conflict with the Romulan Bird of Prey results in the loss of several of his own crew members. Communications officer Lt. Ventura secretly sends off an S.O.S. to the USS Enterprise.

When Captain Kirk learns that this inexperienced Captain is conducting unethical attacks in his name, he alters the Enterprise's course and goes to the scene of the battle.

On the USS Cluster, Penn falls for a trap, and the Romulan commander beams a boarding party to the bridge of his ship. Penn tries to outwit the Romulan, but this too proves tactically unsound. Commander Lazar prepares to execute the entire bridge crew when suddenly Kirk's party beams onto the ship. Commander Lazar respects Kirk's military record and agrees to retreat. Kirk admonishes Captain Penn for his actions.

Stardate 9222.3
Captain Kirk orders the Cluster to the nearest starbase on Christofi IX for routine reports.

Retrieved from "https://heykidscomics.fandom.com/wiki/Star_Trek_(DC)_Vol_1_47?oldid=1458192"
Community content is available under CC-BY-SA unless otherwise noted.