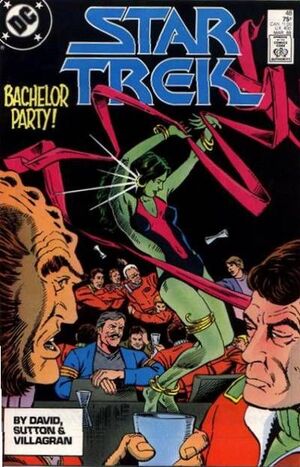 Appearing in "The Stars in Secret Influence"Edit

Synopsis for "The Stars in Secret Influence"Edit

A rogue Federation Federation starship attacks a Klingon science outpost, destroying nearly all personnel at the base. The only survivor is the Human/Klingon hybrid, "Moron".

On the USS Enterprise, the ship's crew throw a surprise bachelor party for Klingon cadet Konom who is betrothed to the human Nancy Bryce. Although Captain Kirk leaves strict orders prohibiting alcoholic beverages from being served at the party, several of the attendees, including Scott Scotty, Bones and Chekov, decide to liven things up by spiking the punch. The tainted punch makes Konom unruly and he gets into a fight with his rival, William Bearclaw. Tensions escalate and before long, the entire lounge erupts into violence. Captain Kirk enters the room to see what is going on, but is waylaid by a flying wine bottle.

The following day, a bandaged Kirk addresses the crew and voices his displeasure over their poor performance. His lecture is interrupted when Spock informs him of the attack on the Klingon outpost and shows him surveillance footage of the Human/Klingon hybrid survivor.

Retrieved from "https://heykidscomics.fandom.com/wiki/Star_Trek_(DC)_Vol_1_48?oldid=1458193"
Community content is available under CC-BY-SA unless otherwise noted.