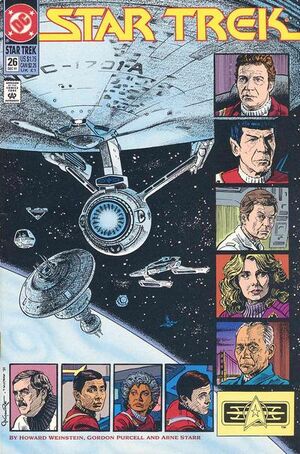 Appearing in "Where There's a Will..."Edit

Synopsis for "Where There's a Will..."Edit

Kirk inherits the title of Consort of the Ruling Ring. Vickie believes that her husband was murdered because he discovered sinister information about his home planet's colonization plans. Pilkor sits between Federation and Romulan space, so Admiral Nogura approves Kirk's plan to investigate Vickie's claims.

Retrieved from "https://heykidscomics.fandom.com/wiki/Star_Trek_(DC)_Vol_2_26?oldid=1458234"
Community content is available under CC-BY-SA unless otherwise noted.