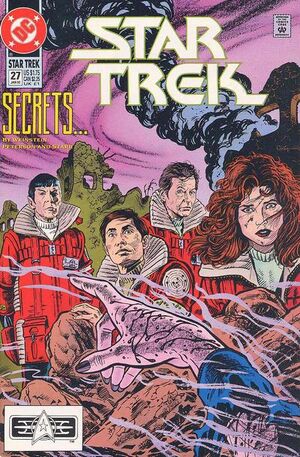 Kirk finds computer files detailing Pilkor's colonization plans, but nothing to indicate that Romulans are involved. The Enterprise picks up a distress call near Pilkor which Kirk and Spock decide may be related. They find a colony nearly destroyed, with only a handful of survivors who say that they were attacked by soldiers resembling Spock.

Retrieved from "https://heykidscomics.fandom.com/wiki/Star_Trek_(DC)_Vol_2_27?oldid=1458235"
Community content is available under CC-BY-SA unless otherwise noted.