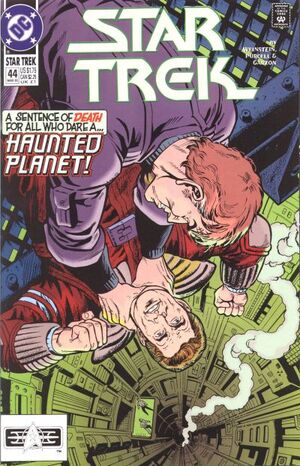 An old friend of Kirk's is managing a mining colony and destroying the planet's ecology. Incorporeal life forms have become trapped in the planet's ionosphere due to climatic changes from the mining operation. Kirk has to convince his old friend that he is wrong.

Retrieved from "https://heykidscomics.fandom.com/wiki/Star_Trek_(DC)_Vol_2_44?oldid=1458253"
Community content is available under CC-BY-SA unless otherwise noted.