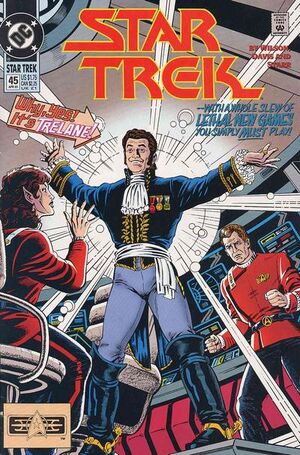 Appearing in "A Little Man-to-Man Talk"Edit

Synopsis for "A Little Man-to-Man Talk"Edit

Trelane (The Squire of Gothos) pays a visit to the Enterprise, to study Kirk engaged in the primitive art of romantic conquest, since his affairs are the stuff of legend. Following several less than successful romantic scenarios staged by Trelane, Valedisa appears. She wants Trelane and won't take no for an answer.

Retrieved from "https://heykidscomics.fandom.com/wiki/Star_Trek_(DC)_Vol_2_45?oldid=1458254"
Community content is available under CC-BY-SA unless otherwise noted.