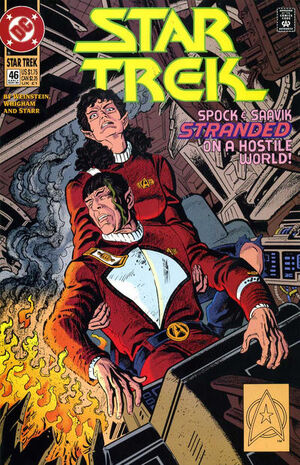 On a diplomatic mission to Mardelva, Spock, Saavik, and a Federation ambassador crash land their shuttle on a remote island. Meanwhile, the Enterprise is confronted by four Klingon cruisers led by Captain Klaa and Vixis. After exchanging threats, Enterprise returns to look for the missing shuttle.

Retrieved from "https://heykidscomics.fandom.com/wiki/Star_Trek_(DC)_Vol_2_46?oldid=1458255"
Community content is available under CC-BY-SA unless otherwise noted.