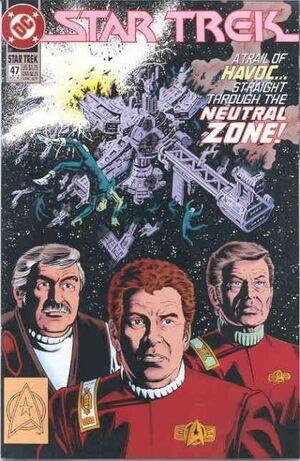 Maldelvan rebels steal a prototype ship with powerful weaponry and cloaking. Enterprise is ordered to stop the ship. The Klingons want to know why Enterprise is in the area. Spock, Saavik, and the rest of their party try to find shelter from their inhospitable surroundings. After destroying several outposts, the rebels head for the Neutral Zone, with Enterprise and Captain Klaa in pursuit.

Retrieved from "https://heykidscomics.fandom.com/wiki/Star_Trek_(DC)_Vol_2_47?oldid=1458256"
Community content is available under CC-BY-SA unless otherwise noted.