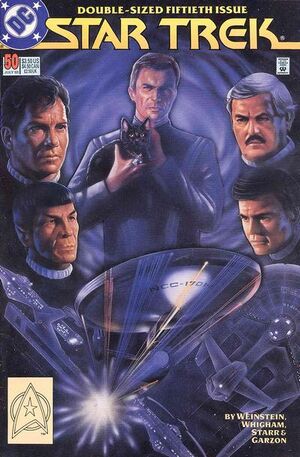 Appearing in "The Peacekeeper Part Two: The Conclusion"Edit

Synopsis for "The Peacekeeper Part Two: The Conclusion"Edit

Spock can't account for the disappearance of Pacific. Kirk is furious over the loss of Scotty and Chekov and wants to shut down the Peacemaker project. Spock concludes that the Pacific must have been transported, though no such transport technology is known. 30,000 light years away, a human, a Klingon, and two aliens are in command of Pacific. After recovering from a bad transport, Scotty and Chekov are forced to make repairs. Back on the Enterprise, Gary Seven and Isis (Assignment: Earth) materialize. Seven, now a senior supervisor, explains his mission to Kirk while Isis flirts with Spock. The Pacific's hijackers are rebel supervisors who plan to use the protomatter weapon against the aliens who trained them as intervention specialists. The aliens, called the Aegis, did away with weapons long ago and will be defenseless against the protomatter weapon. To convince Kirk that the Enterprise must help him, Seven takes him, along with Spock and McCoy to an Aegis facility where thousands of years back and forth in time are monitored. Kirk is apprehensive about the Aegis policy of intervention but he is reminded of his own questionable actions regarding the Prime Directive and agrees to cooperate. Meanwhile, Scotty believes he can link the Pacific's transporters with the time-space transporter used by the rebel supervisors. Seven transports the Enterprise into the vicinity of Pacific. The rebels demand surrender of the Enterprise. Kirk refuses and demands the return of Pacific and its crew. A battle ensues. The rebels fire the protomatter weapon at Enterprise. Kirk evades the first salvo just as Scotty triggers his jury-rigged transporter. The Pacific's crew and the rebels enter the time-space transport stream and Enterprise destroys Pacific. With Gary Seven's help, the Enterprise locks onto the transport stream and reels everyone in. Seven takes custody of the rebels and the Enterprise goes on its way.

Retrieved from "https://heykidscomics.fandom.com/wiki/Star_Trek_(DC)_Vol_2_50?oldid=1458260"
Community content is available under CC-BY-SA unless otherwise noted.