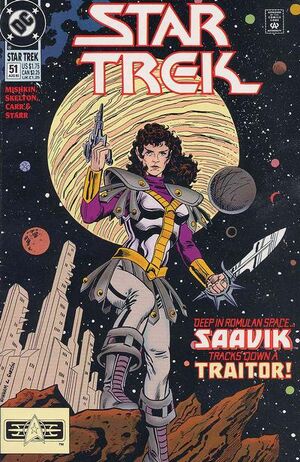 Saavik tracks down and captures a Federation scientist, Professor Erickson, on a Romulan outpost world. Erickson developed a major breakthrough in starship weapons technology and decided to take it to the Romulans to restore the balance of power. Traveling in a captured Romulan vessel, Saavik questions Erickson about his motives while he tries to persuade her to join him. Attacked by a pursuing Romulan ship, Saavik refuses to surrender and fights until the Romulans retreat. Erickson continues to try and persuade Saavik that his is the right way. When they detect an unexpected Federation ship, Saavik realizes that Erickson has programmed a phony vessel configuration signal and the ship is really Romulan. When Erickson fails to win over Saavik, the Romulans activate a neural surger which kills him. The Romulan commander commends Saavik, telling her she would have made a fine Romulan, leaving Saavik to ponder the situation.

Retrieved from "https://heykidscomics.fandom.com/wiki/Star_Trek_(DC)_Vol_2_51?oldid=1458261"
Community content is available under CC-BY-SA unless otherwise noted.