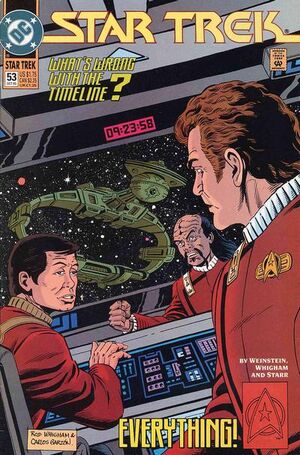 The Enterprise is investigating a temporal disturbance when a Romulan warship appears. The Romulan commander, Admiral Jaricus, recognizes Enterprise, but the Romulan Empire was destroyed fifty years earlier after a sneak attack on the Federation and the Klingon Confederation. The Romulans insist that theirs is the true reality. Enterprise Science Officer Lt. Worf (Star Trek VI: The Undiscovered Country) has no answers and recommends an investigation. The Federation agrees and invites the Romulans to Earth with diplomatic status. At Starfleet Academy, Spock is asked to assist with the investigation. He recommends visiting the Guardian of Forever (The City on the Edge of Forever) to learn whether or not time has been altered.

Retrieved from "https://heykidscomics.fandom.com/wiki/Star_Trek_(DC)_Vol_2_53?oldid=1458263"
Community content is available under CC-BY-SA unless otherwise noted.