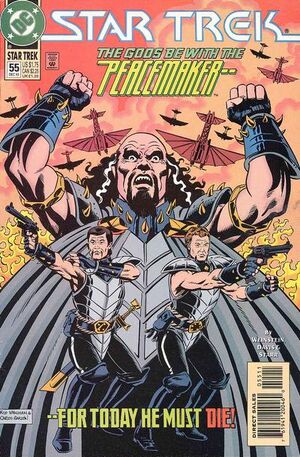 Kirk says goodbye to his son, who will be dead in the restored timeline. The Romulans have no choice but to accept the Federation's offer to observe only, but they are wary. While Spock monitors the Guardian of Forever, Kirk and his team arrive in the Klingon homeworld's past to begin searching for Khartan and the palace guards planning to murder him. Kirk picks a fight with a guard and is arrested. He meets Khartan and is impressed by his intellect and spirituality, making his mission even more difficult. The Federation team finds the leader of the assassination plot but he and his henchmen are killed by a modern Klingon explosive device. Having failed to carry out their mission to ensure Khartan's death, Worf regretfully takes it upon himself to set matters straight, killing Khartan with a phaser blast. Upon returning to their own time, Kirk's team learns that time still has not been set right.

Retrieved from "https://heykidscomics.fandom.com/wiki/Star_Trek_(DC)_Vol_2_55?oldid=1458265"
Community content is available under CC-BY-SA unless otherwise noted.