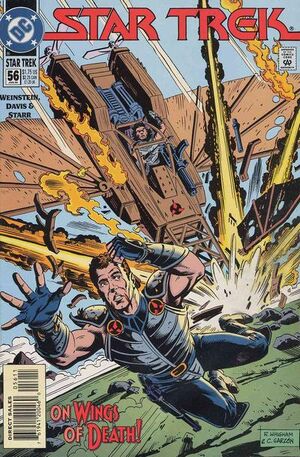 Their mission to correct the timeline a failure, Spock concludes that more than one event in time has been tampered with. Further study indicates that the assassination of the brutal Klingon leader Baraga should never have occurred. Kor stays behind to continue studying the Guardian of Forever's records. The Romulan commander considers the Guardian's potential as a weapon while Kirk, McCoy, Uhura, Sulu and Worf go back in time once more. Kirk and Sulu get jobs as airplane mechanics to be near the site of Baraga's murder. Klingons from the future identify Kirk and his team and begin revising their plans. Baraga learns of the two new and very skilled mechanics, and makes them his own. Kirk and Sulu capture a Klingon trying to sabotage Baraga's plane, but are themselves thrown in jail for their trouble.

Retrieved from "https://heykidscomics.fandom.com/wiki/Star_Trek_(DC)_Vol_2_56?oldid=1458266"
Community content is available under CC-BY-SA unless otherwise noted.