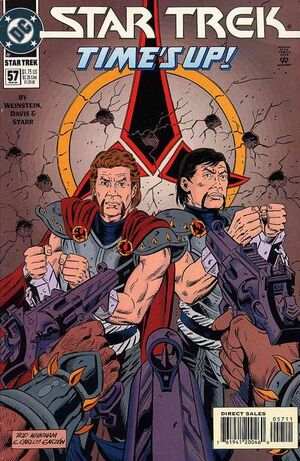 Appearing in "Time Crime The Conclusion: Seems Like Old Times"Edit

Synopsis for "Time Crime The Conclusion: Seems Like Old Times"Edit

Kirk and Sulu are brought before Baraga to tell their story. Baraga kills the would-be saboteur and goes ahead with plans to use his plane in an air show. The renegade Klingons from the future worry that their plan has failed until Baraga's plane explodes during the air show. They capture Kirk and his team, with plans to dispose of them. Kirk learns that the renegades, along with like-minded Romulans, attempted to alter history so that the Federation and the Klingon Empire would both be weak, peace-loving societies, and ripe for conquest. At the Guardian of Forever, Spock confirms that the timeline has been restored, but since Kirk has not returned, he refuses to allow the Romulans to leave. After further consideration, he arrests the Romulans on suspicion of conspiracy to alter time. Ambassador Kor convinces the Klingon Imperial High Command that the situation still requires action. When the renegade Klingons learn that Baraga has survived, they beam back to their bird-of-prey with the Federation team, vowing another attempt to change history. Before they can kill Kirk, a battlecruiser hails them and orders their surrender. After a brief battle, the renegades are captured and Kirk's team boards the battlecruiser which slingshots around the Klingon sun to the present. Lt. Worf learns that he is a defense attorney in this timeline and plans to defend the renegades. Kor bids Kirk farewell and wonders if their common experiences and memories of the altered timeline will affect their future actions.

Retrieved from "https://heykidscomics.fandom.com/wiki/Star_Trek_(DC)_Vol_2_57?oldid=1458267"
Community content is available under CC-BY-SA unless otherwise noted.