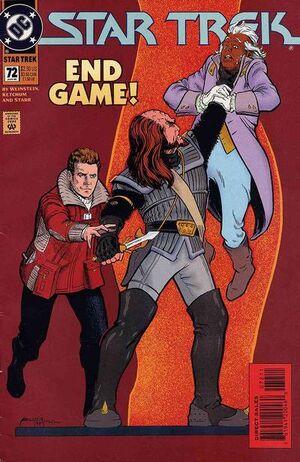 Appearing in "A Wolf... in Cheap Clothing (Conclusion)"Edit

Synopsis for "A Wolf... in Cheap Clothing (Conclusion)"Edit

Kirk and his crew find themselves in possession of a stolen sacred Klingon statue, and must find a way to return it without starting a war. By manipulating the players in the drama, Nolli, the renegade Starfleet officer is captured, the Klingons are appeased, and Kirk gets the girl again.

Retrieved from "https://heykidscomics.fandom.com/wiki/Star_Trek_(DC)_Vol_2_72?oldid=1686641"
Community content is available under CC-BY-SA unless otherwise noted.